At any given time, the Adult Detention Division is responsible for the care and custody of over 1,300 pre-trial, sentenced, and out-of-custody inmates.  In addition to meeting the physical needs of inmates in the facilities, there are other programs such as church services, counseling, library facilities, vocational and skills workshops, educational-and recreational programs available to the inmates.  Inmates may also be eligible for the Sheriff’s Work Furlough Program. This program allows inmates to serve out their sentence while still maintaining their regular employment, thereby contributing to their family’s financial needs. 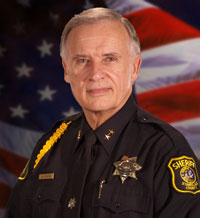 Captain Bill Duncan began his 40-year law enforcement career as a Correctional Officer for the California Department of Corrections (CDC) in 1970. He promoted through the custodial ranks to Captain and through the administrative ranks to Associate Warden and Chief Deputy Warden, until he was ultimately appointed by Governor Pete Wilson as Warden at the California Mens Colony in San Luis Obispo. Captain Duncan served as Warden for ten and one-half years before promoting to Deputy Director in the CDC Headquarters, where he was responsible for providing oversight to all the state prisons and camps. After working eight different prisons and correctional facilities with every security level of inmate, Captain Duncan retired in August of 2003. Immediately after retirement, he was appointed as the Assistant Director at Claremont Custody Center, where he served until his current appointment on October 30, 2006.

Captain Bill Duncan is assigned as Commander for the Adult Detention Division, which includes the Men’s Jail, the Honor Farm, the Public Safety Center, the Court Services Unit and the Civil Unit.

It is the policy of the Stanislaus County Sheriff’s Department to maintain a zero-tolerance regarding inmate-on-inmate sexual assault, staff sexual abuse, sexual misconduct, and/or sexual harassment toward any inmate. Immediate action shall be taken to protect inmates who are reasonably believed to be subject to a substantial risk of imminent sexual abuse.

The Stanislaus County Sheriff’s Department shall thoroughly investigate every allegation of sexual abuse and when warranted by evidence, impose relative sanctions up to and including criminal prosecution.

Retaliatory measures against employees or inmates who report incidents of sexual abuse shall not be tolerated by the Stanislaus County Sheriff’s Department and shall result in disciplinary action and/or criminal prosecution. Retaliatory measures include, but are not limited to, coercion, threats of punishment, or any other activities intended to discourage or prevent an employee or inmate from reporting the sexual abuse.

This policy applies to all inmates and persons employed by the Stanislaus County Sheriff's Department, including volunteers and independent contractors.